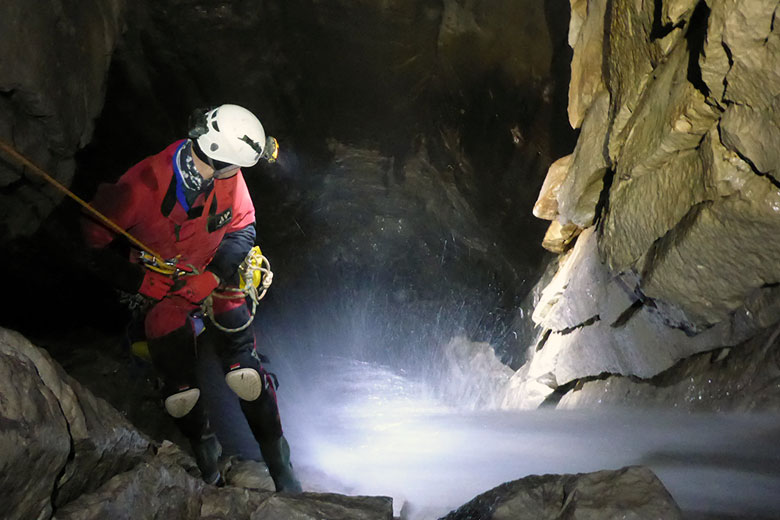 Descending into deep, sheer vertical pits is one of the most thrilling aspects of caving. Rope work is what allows cavers to do this. It is also a learned skill one that is acquired only through dedicated practice.

Beginners are not advised to experiment with ropes under any circumstances, unless they have undergone prior training. One slip or wrong move could be fatal. You cannot rely on websites or books to learn rope technique; it is much more sensible to join an organized caving club in your area. Ensure that you have an experienced and qualified instructor who can teach you how to use ropes properly and safely.

In order to further their exploration cavers began to descend deeper and deeper into the bowels of the earth, and the heavy, unwieldy ladders they had used up until then became less and less attractive.

Single Rope Technique (SRT) was the answer to their problem. In SRT a rope is firmly attached to a strong anchor point (such as a protruding rock or bolt) located near the lip of a pit. It is then lowered or threaded down the pitch in such a way that it touches the rock in as few places as possible. Cavers use special devices known as descenders to abseil down the rope to the bottom of the pitch. In order to get up again, cavers attach devices known as ascenders to climb the rope.

Climbers use ropes to protect themselves in the event of a fall. Also known as dynamic ropes, they are designed to absorb the impact of a fall by stretching. The ropes used in SRT have very different properties from the ones used by mountain and sport climbers. An SRT rope is used like a ladder and must have as little stretch as possible (static rope). Good-quality static ropes have a very high breaking strain and will be able to lift about 3048kg (3 tons). They are often white or green, but do not take colour as your guide always tell the supplier that you require a static rope for SRT and caving (11mm or 13mm; 0.4in or 0.5in is a good choice for a main SRT rope on a long pitch).

Carabiners, also called snaplinks, are metal clips made of steel or aluminium that are used to join ropes and slings together. They are roughly oval in shape and have a hinged gate on one side that allows this device to be connected to the middle of a rope, or through a loop in an anchor. The gate makes the carabiner easy to use, but is also its weakest part.

Designed for improved safety and security, a screwgate carabiner features a threaded cylinder that can be screwed tight to lock the gate. Another version replaces the threaded cylinder and has a Spring-loaded device that allows the user to open, close and lock the carabiner with only one hand.

A maillon rapide is a special link that does not have a hinged gate but is closed using a threaded cylinder. The cylinder is screwed securely onto both ends of the opening, making the link very strong. The disadvantage of maillons is that they require both hands and considerably more time to put in place.

When ropes have to be firmly attached to rock for safety reasons and natural anchors are unavailable, bolts have to be used. Unless you are using an 8mm self-drill anchor bolt, or a resin anchor inserted into a hole

drilled with a battery operated drill, you will have to use a special electric rock drill or a hand drill to create a hole for an expansion bolt. Ensure that depth and diameter of the hole are correct so that the bolt fits in tightly and securely, or it will be unsafe to use.

Insert and slide the bolt through the hole in the hanger before tightening it. This will cause it to expand and grip the rock, fastening the hanger firmly to the wall. Attach a carabiner to the hanger to provide a firm anchor point for your rope. Always use more than one anchor point for main belays and re-belays.

Descenders are devices that are used to abseil down a rope. Attached to the central D-maillon of the harness and to the rope, the friction created by the descender allows cavers to control the speed of their descent. There are many different types of descenders, but cavers generally use either a rack or a bobbin device.

The figure 8 device popular with climbers is not suitable for caving as it has to be detached from the caver in order to attach it to the rope. A descender is small and light so keep an extra one in your pack in case you lose or damage your main one.

The popular rack descender is easy to use. It creates friction by passing the rope alternately over and under a series of bars that can slide up and down between two parallel rods. The speed of your descent is controlled by manipulating the tension in the rope below the rack, and also by applying thumb pressure on the lowest bar.

An advantage of rack descenders is that cavers can adjust the friction of the device by selecting what number of bars they wish to use. This is done during the threading process.

If you need to descend a thin rope or you have a heavy load, use more bars on the rack to increase the friction. With a light load or when abseiling down a very long rope, the weight of the rope itself may cause too much friction as you start your descent. If this happens, you will have to pull yourself down the rope to get started.

In bobbin and stop descenders the necessary friction is created by threading the rope in an S-shape over a series of pulleys and through an attached carabiner. The descent is controlled by adjusting the tension of the rope below the device.

The stop descender has a cam device attached to a handle. When the handle is released the cam automatically bites into the rope thus arresting the descent. This is a very useful safety mechanism if a falling rock has knocked an abseiler unconscious and temporarily disabled him. Stop devices can, however, also result in accidents. These commonly occur when the abseiler panics during a descent and instinctively grabs onto the handle, holding it tightly, thus releasing the locking mechanism on the stop device and allowing the fall to continue. Whatever type you choose, ensure that you know how it works and practise using it before you venture underground.

All descenders depend on a little slack where the rope feeds in just below the device. Without this slack there would be so much friction that the descender would not be able to move on the rope at all. The advantage of this, especially for beginners, is that a caver at the bottom of a pitch can control the descent rate of a caver who is abseiling down the rope. Thus an experienced caver can descend a pitch first and then protect a beginner as he comes down the rope after him. When caving with a novice, always ensure that an experienced caver stays behind at the top to check that the beginner gets onto the rope safely.

An ascender is a device that grips onto a rope when pulled in one direction, but slides freely along the rope when pulled in the other. Ascenders are generally used in pairs or threes and are attached to a caver’s harness with various ropes and straps.

To begin ascending, attach both ascender devices to the rope, moving the top device as high as possible. (The chest device will move up the rope to the height of your chest.) At this point you may have to pull the lower part of the rope down, or weigh the rope down with a tackle bag. Next, hang from the chest harness and bend your knees before moving the upper device a little higher again. Then stand up in the foot loops. These now will be slightly higher, because the hand ascender has moved up. The position of the chest ascender is raised simultaneously as you stand up. Continue repeating this process until you reach the top of the pitch.

Abseiling and prusiking (ascending a rope) are simple and uncomplicated procedures if the rope hangs freely down the middle of a chamber. When deviations and re-belays have been installed for additional support, they become trickier and as you descend or ascend, re-belays can become obstacles.

Ensure that your instructor teaches you how to pass obstacles when approaching from above and below. You will also have to learn how to change direction while you are on the rope. These advanced techniques are very important and must be thoroughly practised under the tuition of an experienced SRT instructor until you have mastered them and feel confident enough to use them in a cave.