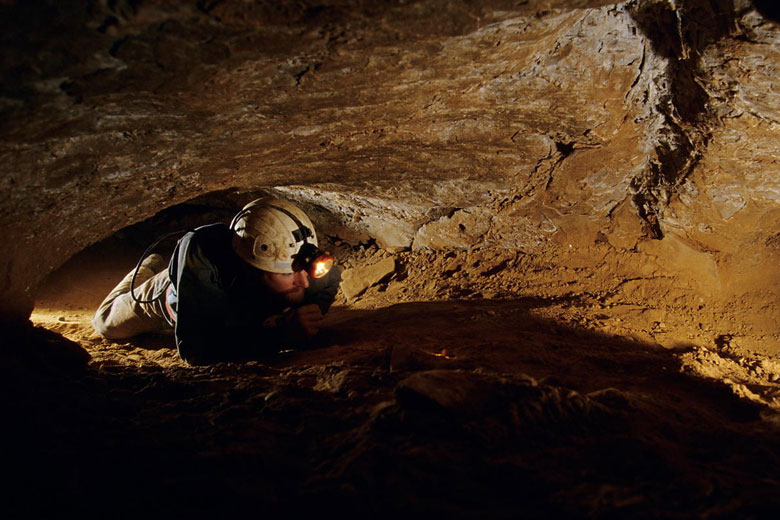 I am prepared to admit that this man-serpent game, with its prospect of having to lie, sometimes for hours, on nasty cold rock, in mud or icy water, rubbing the skin off elbows, knees, and all parts of the body, is not everyone’s idea of enjoyment. Can people really be thrilled by activities so repellent, dangerous, unhealthy, and possibly useless? Is there not beauty and variety enough under the vault of heaven, that a man must go and grope his way blindly at enormous labour, plunging down deliberately into the darkness of the nether regions and all the pitfalls it contains? – NORBERT CASTERET (1897-1987)

This is what French explorer and adventurer Norbert Casteret, one of the world’s first professional speleologists, had to say about caving. His quote summarizes what caving is all about both physically and in spirit. It mentions some of the physical hardships that form part of caving the cold rocks, copious amounts of mud and icy water. It also touches on the potential dangers, an aspect with which he was very familiar.

During Casteret’s caving career, he broke almost every modern safety rule. This included diving alone through flooded passages to explore remote parts of caves, with no more than a few damp candles to light the way. After highlighting just how unpleasant caving can be, Casteret asks the question that most cavers ask themselves at some stage or another: ‘ls there not beauty enough under the vault of heaven?’ In other words, why go caving at all?

As caving covers such a wide range of activities on so many different levels, finding out why people venture underground has as many pitfalls as cavers may encounter on their subterranean journeys. The common thread, however tenuous, is curiosity. This curiosity takes many forms. For some it is a quest to find out more about themselves and explore their personal limits. They are continually searching for deeper tunnels to descend or narrower passages to negotiate, Pitting themselves mentally or physically against whatever obstacles are put in their way. They push themselves a little further each time in their quest to determine the inner limit. For others, it is an inquisitiveness born out of a quest for knowledge.

This was what started Casteret on his underground career. Initially, his interest in prehistory led him in search of the clues that early man had left in caves, until the caves themselves became more important to him than their contents. This is not an unusual introduction into the sport. Whether the caver starts out as a biologist interested in cave animals, or a chemist interested in the process of cave formation, the result is often the same. Their fields of interest lead them into a cave, and before they know it caving becomes as important as the inquisitiveness that brought them there in the first place.

Whatever it is that motivates the very first trip, curiosity about the caves themselves soon becomes an important reason for this risky pursuit. Cavers are always wondering what lies around the next corner, or on the other side of the boulder and even what lies beneath their feet.

Like any other explorer, every caver dreams of a major breakthrough – discovering a new and unknown cave or a new passage. Cavers constantly question, probe and explore the limits to find a clue that may lead them to discovery.

If you’re in need of gift ideas for the caver in your life, please go to UKgifts.co.uk.  They have everything in stock for the perfect birthday present.  If you want books on caving or safety equipment, they can hook you up.  Never be stuck for a Christmas present idea again.

Why the Darkness Beckons

Curiosity may be the common thread running through the many reasons for caving, but it is not a reason in itself to venture underground. For many, the sheer adventure and excitement of seeking out obstacles and the satisfaction of overcoming them are motivation enough to consider caving as a leisure activity.

But is caving a sport? There are elements of caving that are definitely sporting. The rush of adrenaline as you step off the lip of a chasm and commit your life to a thin nylon rope on your descent into darkness has to be experienced first-hand to be appreciated. The smaller sections of caves are no less exciting. Imagine squeezing through a narrow vertical crack with nothing but darkness ahead, a solid rock wall jammed hard against your back and the opposite wall hemming you in from the front. When your heartbeat pounds so loudly in your ears that you are convinced someone is hammering on the rock that surrounds you this, too, can be exciting. Not surprisingly, many cavers believe the excitement generated by the sporting side of caving is the only reason to cave.

Whenever you venture underground, you find yourself surrounded by an environment that is in stark contrast to anything you will have seen above ground. Yet, even though the subterranean environment is very different, certain parallels do exist.

In essence, if a particular ‘above-ground activity’, such as Photography for example, appeals to you, you are likely to find this interest stimulated underground, with the added challenge that you will have to learn how to cope with completely different surroundings and circumstances and the restrictions they impose. Caving can thus become a vehicle to explore and discover exciting new aspects of favourite pastimes, in this case underground photography.

Although many people begin caving for the adventure, once they have mastered the techniques, the adventure itself is often no longer enough to sustain their interest, so many turn to one of the more specialized areas of caving (and some give up).

For some avid photographers, when the beauty and variety of nature above ground is not enough, they are attracted by the daunting prospect of journeying into the depths of the earth in order to capture breathtaking visual images under less than ideal conditions. For them, there is no better place than the dark realms of a cave to capture geological curiosities, improbable dripstone formations and beautiful, seemingly otherworldly vistas. There is a superb guide to photographing caves over at The National Geographic.

Those who enjoy the thrill of exploration, for example, will make a relatively logical progression to pacing out and measuring what they have found. In the case of caves this involves drawing detailed maps. In technical terms, this is known as cave surveying and the maps that are produced are called surveys. Nowadays, well organized teams put enormous amounts of effort into measuring every opening and little passage in a cave system to produce impressively detailed maps.

One of the most specialized forms of caving is cave diving, which has been described as the most risky outdoor pursuit in the world. Cave divers are a special breed. They combine the skills of manoeuvring safely underwater with exploring underground waterways. The dangers associated with surviving underwater in artificial conditions are multiplied during a cave dive. In addition, divers may need to spend hours or even days underground just to reach the start of their dive.

All of the above shows that caving is a very diverse activity. It provides an adventure playground for some and a career for others. Where will you fit in?