How Caves Are Formed 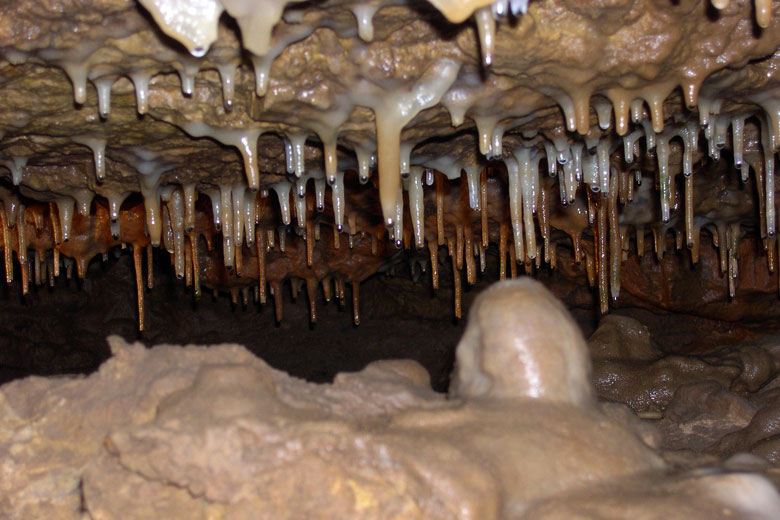 Before you venture underground, it is useful to learn a little about caves, how they are formed and what you may expect to find. Even though one dominant forming process may have been or may still be at work in a cave, more often a combination of factors is involved. Some of the major processes are covered in this article.

To a traditional caver from Yorkshire the world of geology is fairly simple: only two types of rock exist, limestone and everything else. This is because most of the world’s big caves are formed of limestone or other, carbonate-based rock such as predominates in this part of the UK. Since limestone caves form when parent rock is dissolved, they are known as Solution Caves. Limestone is a sedimentary rock chiefly made up of Calcium carbonate. The sediments from which the rock is formed were deposited in lakes and on ocean floors countless years ago. Over time, heat and pressure in the earth’s crust turned these layers (strata) into hard limestone. In some cases, the original sediment layers (beds) stayed separate during the hardening process.

While the hardening process was taking place, the part of the earth’s crust on which the sediments were positioned experienced subtle movement. This caused vertical tension fractures to appear in the young rock, much like a facial mask would crack if the wearer smiled. These cracks are known as joints. The result was a block of rock criss-crossed with fissures and cracks in all directions.

Although later geological processes and violent upheaval may have changed the orientation of horizontal and vertical planes, let us stay with a simple model for the moment, where beds are horizontal and joints vertical. An important feature of limestone is that it readily dissolves, even in a very weak acid solution. Horizontal beds of soluble limestone rock interspersed with vertical joints are the ideal building block for the creation of caves and the process begins from above. When raindrops fall through the air on their journey from the cloud formation to earth, they combine with the carbon dioxide present in the atmosphere to form carbonic acid. This weak solution is just what is required to dissolve limestone. The vertical cracks that were formed so many thousands of years ago make ideal points of entry for the rain.

Carbonic-acid-laced rain trickles into the rock mass and goes to work. When the rainwater passes through an acidic layer of soil, it absorbs the acids, becoming stronger. If this acidic water falls on limestone, it finds its way deeper into the rock via the joints and openings between the different beds. On its way through, the acidic solution gradually dissolves the limestone and thus widens any crack or crevice in its path. Over millions of years, small cracks enlarged into the cave passages that modern cavers explore so eagerly today.

Two main types of cave passages form under the conditions described above. The first, known as phreatic passage, is formed when the entire passage is below the level of the water table and the movement of acidic groundwater through the passage is relatively slow. The second occurs where groundwater flows relatively fast above the water table and there is usually an airspace between the water surface and the cave ceiling. These are called vadose passages.

In the first case, where passages are fully submerged and water movement is slow, the limestone that is dissolved from the passage walls quickly saturates the water. The dissolution process cannot continue until fresh, unsaturated water flows into the system. Passages formed under these conditions tend to have very rounded cross sections. in vadose passages water moves quickly and so, as soon as the limestone is dissolved, the water is replaced by unsaturated water. This kind of flow creates canyon-like passages that are narrow and deep.

Cave passage formation often involves a combination of the phreatic and vadose processes. A typical case occurs when a phreatic passage originally forms below the surface of the water table: it will have a typically rounded cross section. As the water table drops, groundwater flow through the cave system speeds up and changes to a vadose-type of development, which results in keyhole-shaped passages. In caves where the groundwater table has dropped so low that no water is present at all, you may find what is sometimes labelled fossil passages, i.e. dry passages. This term indicates that no further enlargement is evident or in progress.

Although only subterranean processes have been described here, very similar forces are at work shaping the landscape on the surface. In early geological times, fissures exposed by tectonic action on the surface were widened and the resulting network of cracks that led to the maze of passages below ground formed a landscape characteristic of limestone regions. Known as karst, it is named after the limestone Karst plateau near Trieste.

Both solution and erosion caves are formed when the original bedrock is removed, leaving cavities. The difference between the two types of cave formation is how it is removed. In a solution cave chemical reaction dissolves the rock; in an erosion cave the cause is a mechanical process. The main prerequisites for the formation of an erosion cave are a pre-existing cavity in the rock, a fluid of some kind (usually water) which transports a scourer, and a scouring agent that whittles the rock away.

The process is very simple. Water carrying abrasive particles in suspension flows through the cavity. As it does so, the particles begin to wear away the walls and enlarge the cavity. Particles do not have to be small. Large boulders can also be agents of erosion. An example of this is a rock made of a hard material that becomes trapped in a depression in a stream bed made of a softer material. If the stream is powerful enough it will move the rock around within this depression, creating a grinding action. Any trapped sand particles act as ‘grinding paste’ and together the two will wear away the softer stream bed to create a pothole. Erosion is usually a secondary cave-forming process a cavity or depression already has to exist. This means that erosion frequently occurs in caves that were initially formed by solution, but it is not always the case. As the earth’s crust moves, new cracks and faults are created continually in all types of rock. When a strong stream finds such a newly formed entrance in any kind of rock, and if the crack is large enough, the erosion process can begin. The resulting passages are usually a combination of deep cylindrical potholes and canyon-like passages.

Washout caves are very similar to erosion caves in that here, too, material is carried out by water. The difference between the two processes is that erosion wears away a solid mass of rock, while a washout is formed by the removal of loose material that does not have to be worn down. This type of cave occurs where the surrounding parent rock is not solid, but comprises either gravel or conglomerate (a sedimentary rock consisting of round stone fragments embedded in a finer agent). Small particles of sand between larger pebbles are washed away until a sufficient hole is created and a pebble is loosened. When enough small material has been removed the pebbles will have nothing left to support them and will, in turn, be washed out of the newly formed pipe.

This process eventually leads to the development of a cave.

Not all caves occur in rock. Although not everyone agrees that cavities and shafts that have formed in ice can be termed real caves, they can provide some very exciting caving.

Glaciers are rivers of ice that grind slowly down valleys in much the same way water does. During warm periods, meltwater (with a temperature slightly warmer than the surrounding ice) finds its way into various cracks and crevices and begins to enlarge them until they become cave passages.

Glaciers, however, are not the only places where ice caves can form. In the colder regions of the world -wherever large, brittle plates of ice form, such as Greenland and Antarctica – any earth movements, and even changes in gravity or shifts in temperature will cause the mantle of ice to crack. The resulting fissures sometimes reach hundreds of metres deep into the plate.

The cave formations described so far began with a piece of rock being worn away either by chemical or mechanical erosion, or sometimes both, leaving a cave surrounded by the remaining host rock. Lava tubes are different because the surrounding rock is deposited while the cave is being formed.

Lava tubes are exactly what the name implies passages formed in lava. When molten lava flows from a volcano over open ground, its top layer is exposed to the atmosphere and cools down. As it cools it solidifies, forming a hard crust over the top and sides of the flow, which acts as an insulator and slows down the release of heat into the atmosphere. The bottom of the flow rests on the ground, also acting as an insulator. The molten flow is thus confined within a thermally insulated pipe, which keeps it warm and fluid.

Provided that the lower end of the pipe is not blocked, the lava will continue to flow through the tube even after the source of the flow is cut off from the volcano. The pipe will slowly drain itself of lava, leaving behind the crust that kept it insulated.

The result is a tube created entirely of solidified lava that can sometimes be several kilometres or miles long. This type of cave commonly occurs in places such as Hawaii and the Canary Islands where there are many active and dormant volcanoes.

Movement caves are neither hollowed out like erosion caves nor built up like lava caves. They occur when powerful tectonic movements open fissures in the upper layer of the earth’s mantle. The caves literally form where the earth is being pulled apart and so caves formed in this way will often display matching features on apposite walls. If one wall has a rock protruding from it, an examination of the opposite wall will reveal a hole similar in size (left when the fissure Opened and the rock was pulled away).

Yet another type of cave that is created by movement, albeit a completely different type, is the talus cave. Talus is nothing more than the pile of boulders that usually collects at the bottom of mountain slopes. As a mountain slope erodes, boulders break away and roll down to collect in a heap at the bottom. if enough large boulders break away and tumble down to form a sufficiently large heap, the gaps between them become big enough to be considered a cave. Talus caves can provide some extremely challenging caving.